It’s not just your engine oil that you need to protect. Your DSG gearbox is very susceptible to overheating, leading to protection mode that reduces engine power and eventually prevents gear selection. 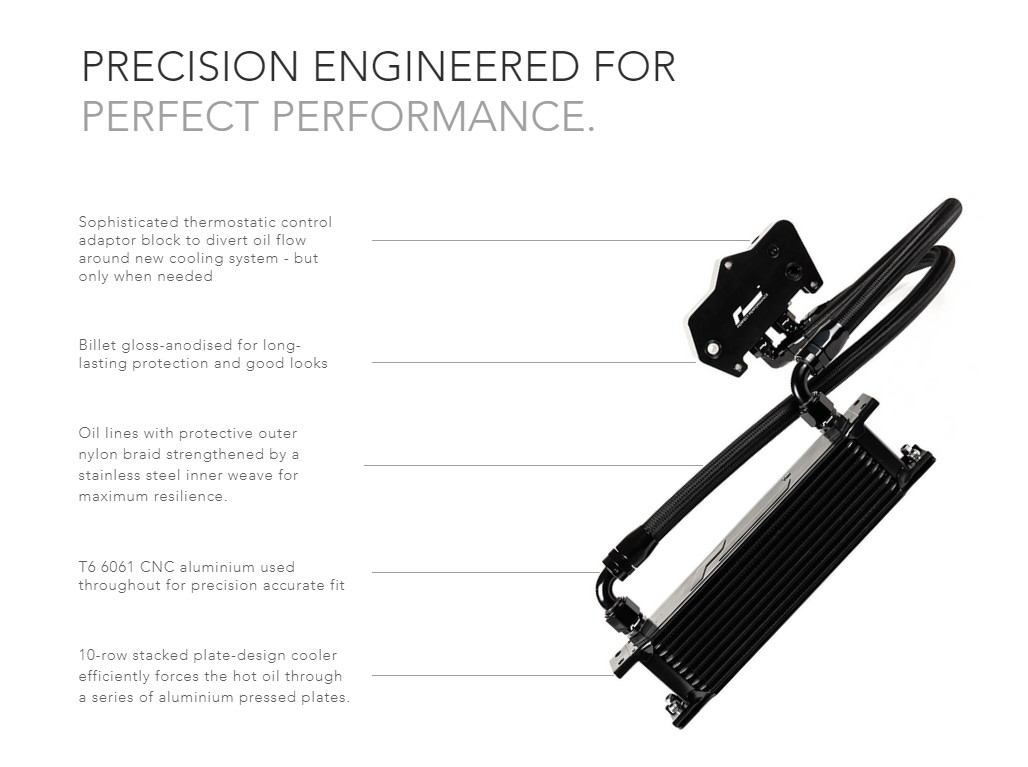 And the higher your power, the harder you drive, the more important it is to protect it with the RacingLine 2.0 TSI DSG Oil Cooler.

Transferring more power and torque through the DSG gearbox generates ever more heat to dissipate. Significantly increased oil temperatures means only one thing: a decrease in the ability for your DSG box to stay properly cooled, eventually causing power drop and gear selection issues.

Under hard driving, the factory DSG oil/water cooler is easily overwhelmed. Problems start to occur when oil cannot dissipate its collected heat fast enough and the oil begins to thin and degrade – losing its lubrication properties. 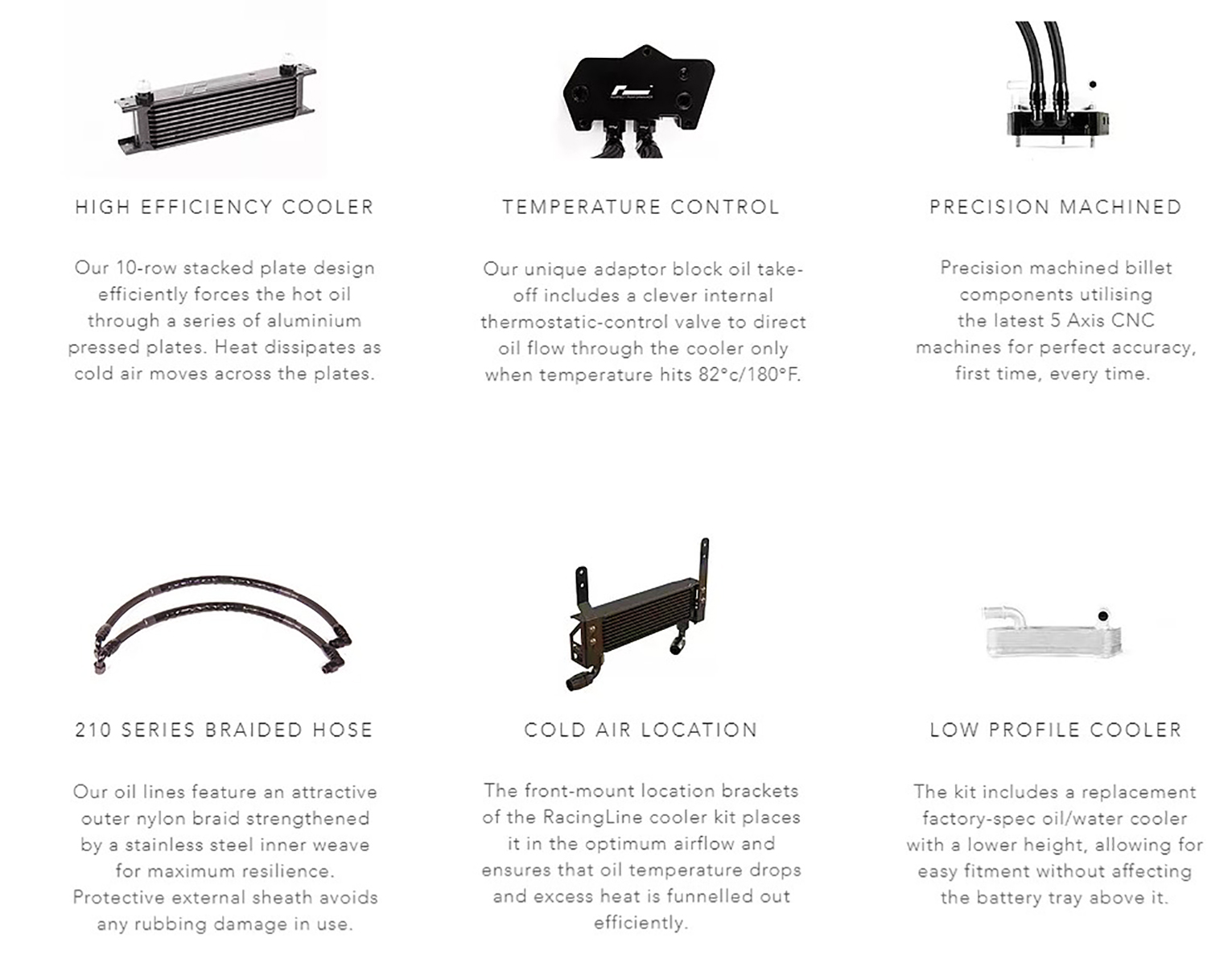 When this happens, the DSG will protect itself and begin to lower the engine torque, increase shift times and eventually loose gear selection.

The RacingLine kit solves this problem: by adding in an additional air/oil cooler positioned right in the airflow at the front of the car, oil temperatures are reduced by around 15 – 20 degrees centigrade (of course dependant on how the car is being used, ambient temps and state of tune).

The kit uses a clever design which retains the factory oil/water cooling and adds to it with the thermostatically-controlled front-mounted cooler – doubling up your cooling capability when it’s needed with less heat transfer into the water system.

Only when the oil exceeds normal temperatures, the thermostat opens. Oil temperature then drops significantly as it is pumped through the densely packed fins of the 10-row cooler’s large surface area mounted right in the cool airflow.

The system is designed for straightforward fitting and ultimate reliability. Everything needed for perfect fitment is included.

Unlike other DSG oil cooler kits, the RacingLine package keeps the oil/water cooler and adds to it with the oil/air cooler

210 Series stainless steel, nylon braided feed and return lines run past the chassis leg into the bumper cavity, then connecting to the oil cooler core 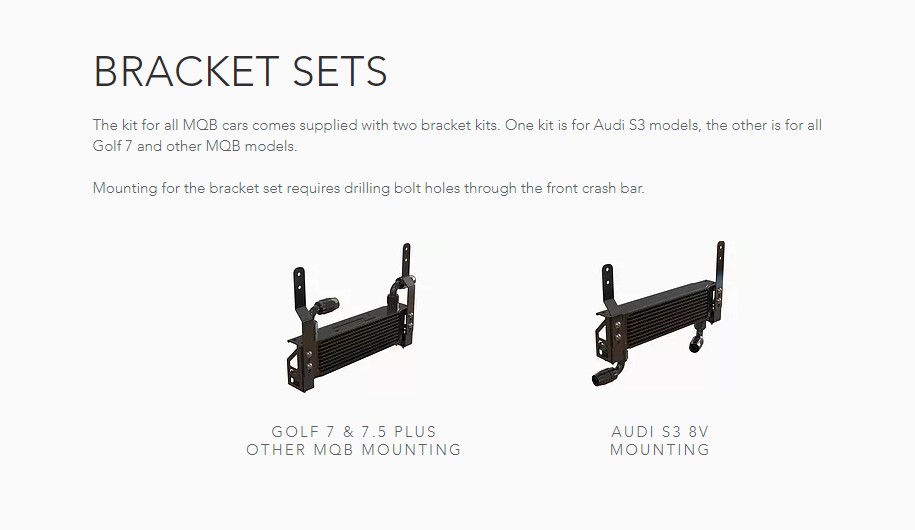 Our DSG Cooler design is a unique design: it retains the factory oil/water gearbox cooling system, plus adds our oil/air cooling as well. Why?

The DSG oil will still quickly warm up from the hot water in the engine’s coolant system, reaching full operating temperature as soon as possible.

But that’s where the problem begins on a hard-driven car. The hot engine coolant will now have little to no cooling effect on the DSG oil, and gearbox temps start to rise rapidly.

That’s the point at which our sophisticated thermostatic control valve inside the adaptor block will then divert hot oil out to the new 10-row cooler located in the cool fresh air flow.

After the cooled transmission oil returns from the cooler, it carries less heat to be absorbed into the engine coolant system – helping control all the temperatures under the bonnet.

Our replacement oil/water cooler (that’s the silver part in the picture) is lower in height than the factory one. So the total height of both parts still fits perfectly under the battery location above it.

WHAT’S IN THE KIT?

WHAT’S THE PROBLEM ON TRACK?

Carry on driving, and if temperatures then rise above 145°C/293°F, your DSG clutches no longer get the fluid pressure they require and you loose drive altogether as the box goes into a safety mode.

If you’re in a hot climate this can happen after only about 15 minutes at the track – meaning a long wait while your gearbox cools down again.